Dirty metals, war metals, child labour, the dark side of the energy transition… These are themes regularly associated with rare, critical and strategic metals in the press. However, behind the commonplaces, analytical shortcuts and virtue signalling that few authors need to back up or substantiate, hides a reality: The production of all metals has real environmental impacts for which we are collectively, as final consumers, responsible.

In this special edition extended blog post, we will not focus on the social and societal problems attributed to rare metals: The subject is vast, controversial and fundamentally difficult to approach without extensive fieldwork. We will try instead to create as comprehensive an account as possible of the environmental issues linked to the production of rare metals, based on factual data. And the first question to ask here is:

How are metals made?

It all starts with rock. Rock that is rich in metallic elements, and that will have to be extracted from the mine (underground or open pit) in order to be crushed. The rock is ground down to a mesh that is fine enough for the metal grains trapped in the rock to be released from the gangue. The ore is then concentrated and selectively separated by various chemical and thermal processes (pyrometallurgy, hydrometallurgy, selective extraction) until the metal is obtained at the desired purity and with a level of trace elements satisfying the desired use. Each of the steps in this long process is extremely energy intensive, whether mechanical for mining and grinding, chemical for hydrometallurgy or thermal for pyrometallurgy.

What do we mean when we speak of environmental impact and pollution?

There is no single unit used to measure pollution. Pollution levels can be spoken of in terms of CO2 emissions, nitrogen oxides, heavy metals… So let’s take a quick look at all of these factors:

Taking these various factors into account, it becomes clear that metal production is a dirty business, and that it is likely to remain dirty. But that observation then begs the question: How can we quantify the environmental impact of mining for any particular metal?

As we have seen, the pollution generated by the production of metals can be attributed to a great diversity of factors, and is therefore hard to synthesise. For this reason, the remainder of this article will focus on CO2 (which is not, strictly speaking, a pollutant) because it is the negative externality of metal production which is most easily quantifiable. Its impact is also global (in contrast to localised pollution from heavy metals, radioactive elements and AMD) and it is possible directly to compare negative effects (CO2 emissions) and positive effects (efficiency gains and CO2 savings associated with the technological applications of metals).

It is possible to establish a relatively general rule: Beyond the “natural predispositions” for ore mentioned above (relating to its heavy metal or sulphide content), pollution levels are very strongly correlated with the volume of rock extracted and crushed.

The volume of crushed rock for any particular metal is obtained by multiplying the metal content of the ore by the production volume for that metal. For example, since the start of its operation, 6 billion tons of rock have been extracted from the Kennecott copper mine (Utah, United States) to produce 18 million tons of copper (the equivalent of a year of global production currently).

One can’t directly compare the impact of the production of 20 million tons of copper with that of 200 tons of platinum by saying that the first pollutes 100,000 times more than the second, because the platinum content of platinum ore is much lower than copper concentration of copper ore.

So how can we get a good intuitive approximation of the environmental impact of producing one metal versus another?

It follows that the economic size of the market for a metal is a good approximation of the amount of energy required to obtain it and therefore of the level of pollution caused by that same production.

Let’s compare the production of copper to that of gold:

20 million tons of copper valued at around USD 9 / kg = a market of around USD 180 billion per year. Given the linear correlation we have just established between the market size of a metal and its pollution level, we can say that copper produces 180 “pollution units” annually.

Or in other words, the production of one kg of gold pollutes 6,700 times more than that of one kg of copper. And we are not even talking about the ecological disasters linked to illegal gold mining in Guyana and elsewhere.

The energy required for the production of a metal is directly correlated with the metal content of the ore. As a result, decreasing returns from metalliferous deposits mean that the energy intensity of metals, and therefore their environmental impact, will continue to increase tendentially. In other words, it will take more energy to produce a metal tomorrow than it takes to produce that metal today (which incidentally entails that a metal produced tomorrow will be worth more than a metal produced today).

The average metal content in mined deposits will tend towards average levels for the earth’s crust as the richest deposits are mined and depleted. This is simply a matter of entropy.

Methodology and science: Everyone can agree on LCAs

A Life Cycle Assessment (LCA) makes it possible to quantify the environmental impacts linked to the production of any good or service. LCAs can help us to know with relatively high reliability (study boundaries and accessibility of data notwithstanding) the precise impact of production for each metal, as long as it is obtained as a primary product. And we can use that to attribute pollution levels.

Rare metals: They always have to stand out from the bunch!

And here is where the specificity of rare metals comes into play: Rare metals are not obtained because we want them (although we do) but because we find them with metals that we want (referred to as primary products).

Almost all rare metals are obtained mainly (and even exclusively for some) as co-products or by-products of base metal or precious metal (gold, silver and platinum) production.

Since rare metals are thus for the most part only “bonuses” helping to lower the production cost of target metals, their impact in terms of pollution cannot be directly calculated.

For this reason, there was no LCA in the scientific literature on rare metals that could help us reliably to quantify their environmental impact.

In 2014, “Life Cycle Assessment of Metals: A Scientific Synthesis” was published. In this research work, scientists Philip Nuss and Matthew J. Eckelman carried out LCAs for 63 metals, including a large number of rare metals, taking as reference the production data for the year 2008.

Here are the stages of their work:

Here is the result of their studies, in terms of CO2 emissions per kg produced:

And here are the consolidated results: 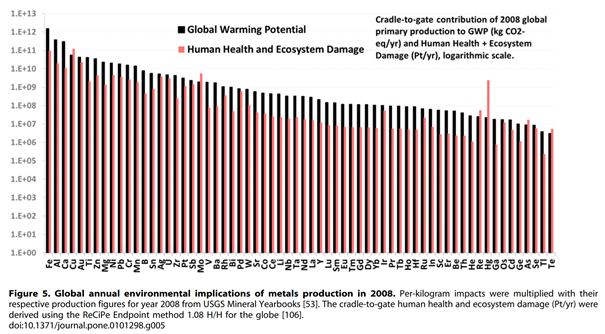 Since the logarithmic scale does not help with an intuitive understanding of the subject matter, we have attempted, with the table below, to reproduce the data from the previous graph by applying the annual world metal production (USGS) figures. 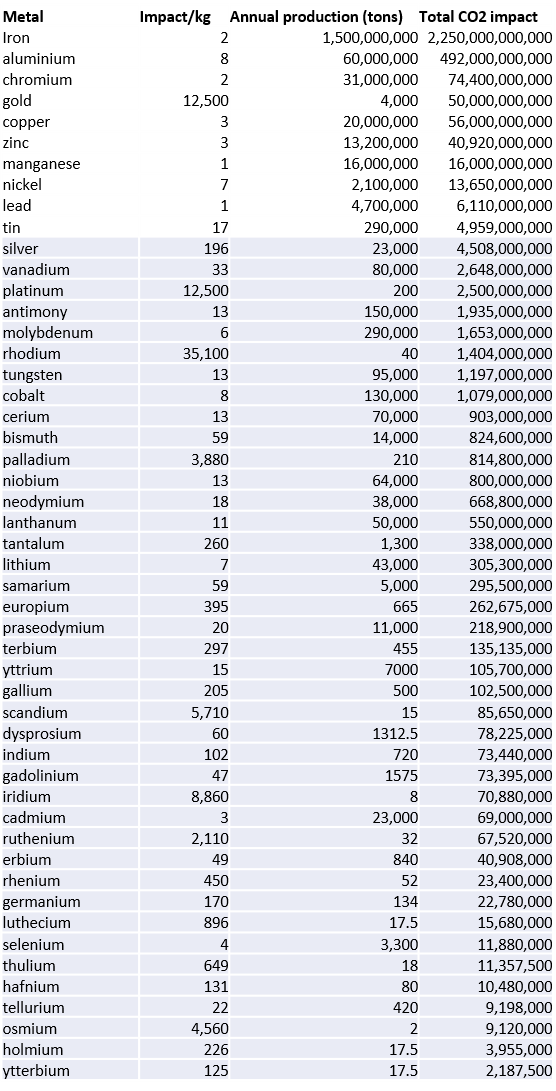 If we add together the CO2 impact of all rare metals (in grey in the above table), we arrive at an impact equivalent to less than a third of that of the simple production of gold… which, let us not forget, does not serve any technological purpose!

Even more revealing is the observation that all rare metals combined represent only 0.79% of the pollution linked to the production of all metals put together. Still further, if we remove the precious metals platinum, palladium and silver from our rare metals group, that percentage drops to 0.53%.

Does that 0.53% figure really justify the “rare metals bashing” that’s been going on in the media?

Mining is dirty… And it will remain so. Unfortunately, you can’t make an omelette without breaking eggs, nor can you make metals without breaking rocks… and impacting the environment. To quote Voltaire: “It’s at this price that you get sugar in France.”

Take the example of rhenium, which is used mainly in nickel superalloys in gas turbines and jet engines. What would be the excess energy consumption (gas or kerosene) induced by the abandonment of this metal? 5%? 10%? 20%? On the scale of the consumption of world air transport (which accounts for about 3% of global CO2), we could quickly arrive at figures that are out of proportion with the energy required to obtain rhenium. (Considering that the extraction of all rare metals, according to the table above, produces about 0.05% of global CO2).

To give an idea of scale: Positing the conservative estimate that the addition of rhenium enables a 10% efficiency gain for air transport, that would mean rhenium alone generating an “emissions saving” of 0.3% of global CO2… That is to say 5 to 6 times more than the CO2 impact resulting from the production of all rare metals combined.

The same could be said of vanadium, which makes steels lighter (especially in the automotive industry), of neodymium, which improves the efficiency of electric motors and saves on maintenance (and therefore energy) for offshore wind turbines…

Much could also be said of gallium nitride which allows remarkable efficiency gains compared to silicon in electronic applications. And of gallium, which enabled the LED revolution and the dividing by 10 of the energy needs related to lighting. The list goes on and on…

The balance shifts even further in favour of rare metals if we consider their role in the production of carbon-free electricity. Be it in solar (indium, tellurium, silver, gallium …), in thermoelectricity (tellurium, germanium), wind power (neodymium) or even nuclear power (hafnium, zirconium …), rare metals are elements that are essential and indispensable to the post-fossil fuel world that is emerging.

It is impossible precisely to quantify the environmental benefit for each rare metal, in terms of the amount of CO2 saved by its technological applications per ton of metal produced. Nevertheless, it is reasonable to assert (in light of our calculation on rhenium for example, and taking continued growth in the transport and electronics sectors as a given) that the net environmental impact of rare metals is positive.

We could give many more examples of the extraordinary things made possible by rare metals, these spices of the commodities world, on whom our quality of life depends. The goal here is not to exonerate the metals supply chain of its real environmental impacts, but to restore a little justice and truth to a media onslaught that has been portraying rare metals as the “dark side” of the technological revolution. Indeed, it appears that media coverage of the environmental impact of rare metals is inversely proportional to their actual impact.

It should be noted that compared with other metals, including gold, rare metals do not benefit from the support of any mining giant or any powerful industrial sector. Perhaps it is because no lobby has an interest in protecting their reputation that rare metals have become what they are: Scapegoats for a consumer lifestyle whose consequences are hard to face up to.